How to Care for Cast Iron 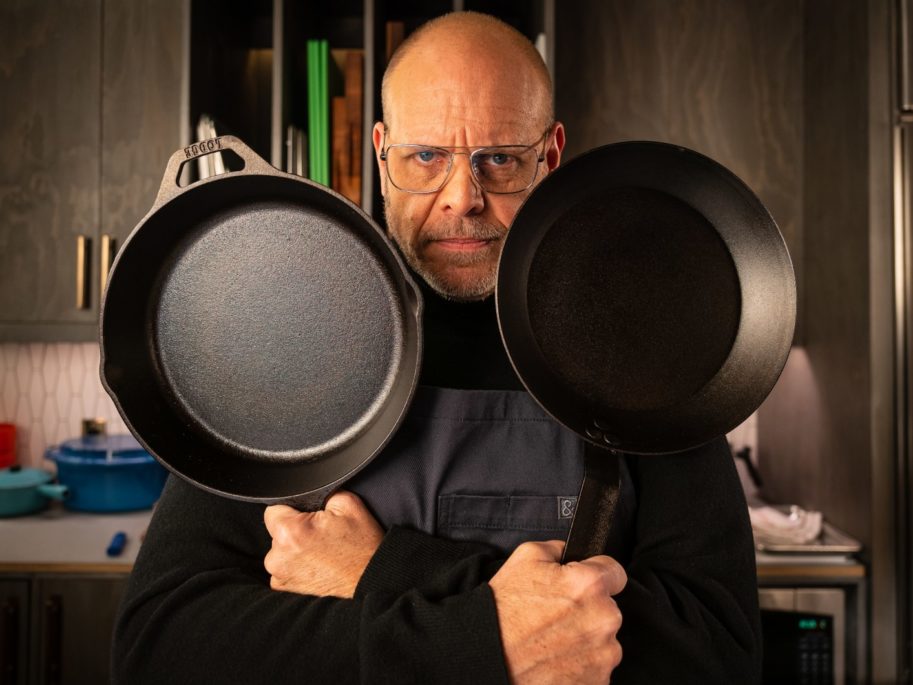 Our trusty cast iron skillets are used almost daily in the test kitchen, where proper care is paramount. After all, good cast iron cookware can be expensive, but it’s an investment worth making.

When cared for correctly, cast iron skillets are virtually indestructible, despite what some may say. They also get hot and stay hot better than most pans, not to mention they’re super versatile — in what other vessels can you make a juicy steak, a beautiful brunch dish, and perfect Southern-style cornbread?

They’re also easier to season and maintain than most people think. But what exactly does caring for cast iron entail?

A few years ago, flaxseed oil was touted as the best curing agent on the market, but it’s really expensive and prone to rancidity. In the test kitchen, we usually go with canola or safflower because we always have it around and it’s cheap.

At the end of the day, the specific oil with which you choose to cure doesn’t matter as much as its properties. Choose an oil with a high smoke point and one that is not fully saturated so that its unsaturated fatty acids can form bonds with the skillet when the oil heats up and oxidizes.

As is so often the case in cooking, technique matters most. Pop your clean cast iron into the oven and crank it to 200ºF or whatever your lowest setting is. When the pan is warm, rub it all over with a very thin layer of oil, about 1/2 teaspoon. Warm iron, like laughing brains, is more absorbent. Remember, total coverage is key, not just the bits that touch the food — in other words, make sure you coat the bottom, exterior sides, and the handle, too.

Now, here’s where things can go very wrong. If the oil layer is too thick, the resulting surface will be sticky, and you’ll have to strip the pan and start over. So, add a very thin layer of oil and then wipe it off until you can’t see it anymore — don’t worry, there’s still plenty on there. Place the pan upside-down, mid-oven, and crank the hot box to its highest heat for one hour. Then, kill the heat and leave the pan inside until it’s completely cool. If you can, repeat the cycle two more times. Yes, that means it’ll take about eight hours to cure a pan, and yes, it’s worth it.

Keeping up with a properly seasoned pan means cleaning it well after each use. Luckily, the process is fairly simple:

If your pan is too dirty to be cleaned using the above procedure, you can introduce water and a sponge, but make sure to dry the pan thoroughly afterwards. In the test kitchen, we like to place the pan over low heat first to evaporate any liquid, then crank the heat up, and follow the procedure above starting at step 3.

Since cast iron is virtually indestructible, there are plenty of very old skillets out there that are perfectly good for cooking (if not better than those that are made today). Keep a lookout for vintage skillets at garage and estate sales, as well as well-stocked antique stores. The kicker is that they’re usually not well cared for, but this, believe it or not, is an easy enough situation to remedy…with a little elbow grease.

To clean and cure a rusted, beaten-up skillet, scour the surface with steel wool (gloves are highly suggested for this step) until the rust has been removed. Wash the skillet thoroughly with warm water and a touch of dish soap. If small amounts of rust persist, use a scouring pad or bristle brush to gently scrub. Dry the skillet thoroughly, and then follow the above curing technique, repeating at least 3 to 5 times.

Fun fact: If you choose to invest in carbon-steel pans in addition to cast iron, you can season your new cookware with the exact same procedure.

A Peek Inside The House That Dripped Chocolate
<NEXT>
Spice Rules: The Dos and Don’ts of Cooking with Spices The Really Final Turkey, with Gravy